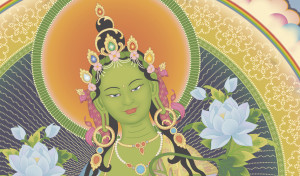 I was driving home to Cornwall in my campervan after running a magical advanced sound therapy workshop in Dublin. I was listening to a CD by Jai Uttal and Ben Leinbach marvelling at the spiritual soundscape they had created with a mix of ancient and modern instruments and their voices.

I suddenly felt compelled to chant the Green Tara mantra even though this wasn’t playing on the CD. I had moved into the middle of the 3 lanes on the motorway, cruising along blissfully at a steady 65 miles per hour.

And then it happened….

There was a loud crashing noise. The car in front of me braked suddenly and swerved out to the right. I jammed my foot on the brake as I saw bits of plastic and metal flying through the air.

I immediately pulled my van over to the side of the road and ran back towards the car involved in the accident. The boot and rear seats of the car had been smashed together.   A small child’s car seat in the back was squashed up against the front passenger seat.

Astonishingly there was no-one in the car! I look around and saw a woman standing on the other side of the railing at the edge of the road and ran over to her.

Another man arrived and I shouted out “I’m a therapist. I’ll look after her. Phone 999 and report the accident”.

I invited her to sit on the metal railing and to take deep breaths. She was so shocked that she couldn’t do this at first. So I put one hand on her belly and other on the heart chakra on her back and told her to breathe with me.

I demonstrated how to take long deep breaths. She was able to follow this and after a couple of minutes she started to calm down. I then did some vocal toning as I continued to hold her and she broke out into an outpouring of tears and a torrent of screams and jumbled words.

Gradually she revealed that her car had broken down in the middle lane of the motorway. Terrified, she had spotted a gap in the traffic, escaped the car and ran to the side of the road. At that moment a large lorry smashed into the rear of the car, spinning it around and pushing it into the inside lane.

The speed by which the emergency services teams arrived was incredible – the paramedics; the traffic patrol; the firemen and the police. They were all brilliant in the way they handled the situation.

As I continued to look after the woman, I talked to the police and paramedics. They were amazed that no-one had been injured. The truck driver was OK. The woman in the car was shocked but not physically harmed. No other vehicles had been involved in the accident. They said that normally in a situation like this there are fatalities and multiple injuries. Often there’s a pile up of vehicles. None of that had happened.

As I drove away, leaving the woman in the care of the emergency team, I heard an inner voice say to me: “Never underestimate the power of sound.” I realised that there was a connection between the chants that came through me and the miracle that no-one was injured in this accident. It was as if a divine presence, an angel, had landed and like a super-conductor had orchestrated the players to ensure that a beautiful harmony was maintained in the chaos, and that lives were saved.