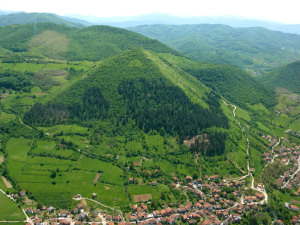 Since it was discovered in 2005 by Dr. Sam Semir Osmanagich Ph.D., director of the Center for Anthropology and Archaeology at the American University in Bosnia-Herzegovina, the Bosnian Pyramid complex has been stonewalled by mainstream archaeologists until recent scientific evidence which makes it impossible to deny the authenticity of this history changing discovery.

Over 200 scientists from different universities and institutes around the world have now studied the pyramids.

The facts that have been verified by scientific analytic testing include:

· Radio carbon dating shows the pyramid to be at least 24,800 years old

· Material Analysis shows that the structure is from man-made concrete

· There is an 8.000 kg ceramic block under the pyramid in the underground labyrinth

· An energy beam, electromagnetic in nature with a radius of 4.5 meters and a frequency of 28 kHz has been detected and measured coming from the top of the Sun pyramid

· An ultrasound beam with a radius of 10 meters and frequency of 28-33 kHz has been measured on the top of the pyramid, as well

“Although tens of thousands of pyramids have been discovered across the planet, none have the construction quality and date back as far as the ones in Bosnia,” states Osmanagich.

“Bosnia is the original pyramid, the oldest and largest ever constructed. It has an exact zero degree North orientation and is potentially the key to releasing information about ancient technology that can free the world of its dependence on fossil fuel along with offering the possibility of finding astounding medical breakthroughs in the scientific community.” 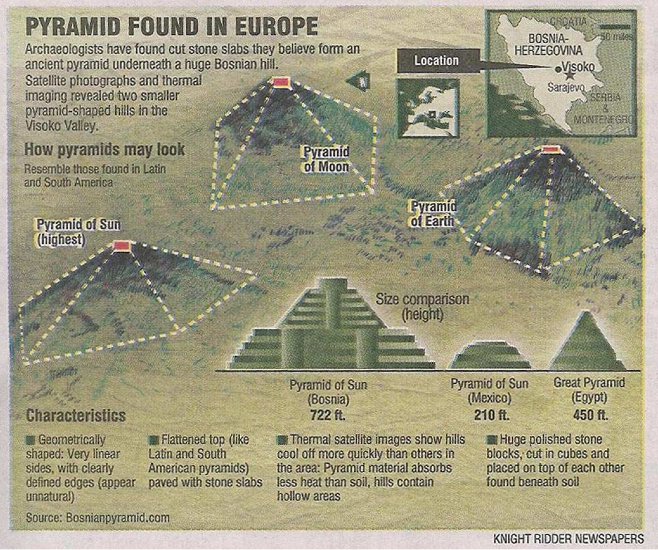 In May 2013, Professor Paolo Debertolis, from the University of Trieste, Italy went to Bosnia to research the archeaoacoustics on the top of the Pyramid of the Sun.

He found very strong emissions of low frequencies and infrasounds around the top of the hill.

The range in total silence and with an absence of wind was between 10 Hz and 70 Hz with a large peak around 48 Hz. The volume was not elevated.

This mechanic vibration is the most likely reason why so many sensitive people have the sensation of hightened energy when they arrive on top of the pyramid. They feel the vibrations!

Below a particular volume we perceive low sounds better by vibration through sensors in human bones than by ear.

The low frequencies and infrasounds found on the Pyramid of the Sun explain very clearly the sensation of mysticism which some people perceive in this place and how its very easy for those practising meditation to apply this technique at this site.

He indicates that these frequencies probably come from a nearby earth fault (or ley line) and are concentrated by the pyramid shape. In fact there are no similar frequencies in the surrounding hills. 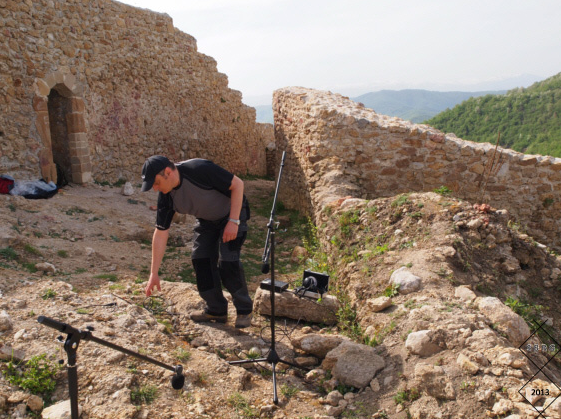 Please use high quality headphones to hear the sounds. You will also hear sounds of buzzing flies, dogs barking in the distance and a plane flying over.