The aboriginal people of Australia navigate the bush by what they call the song lines. I believe they are called ley lines in England. Each line has a song which tells a story about an animal’s journey; there is a kangaroo line, a lizard line and many more. 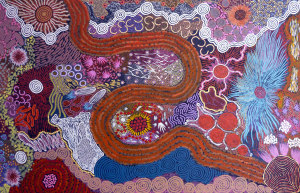 They would connect to the land and listen to it’s music; to be guided to water and to other tribes; to get to where they needed to go.

THE SONG OF THE BUSH

This is the story of my experience of what I call The Song Of The Bush – just a tiny glimpse of the magic of the land.

I was twenty four and nearing the end of my five year journey.  It was  over a year since my first experience with sacred sound, but that’s another story – a lot darker tale than this one.

I was on my way to a festival near the Blue Mountains, hitch hiking the thousand kilometer trek across the desert from Melbourne. The first day had been very good for lifts.  I had made it over half way and at two in the morning I had got out a truck, climbed a hill and put up my tent under the stars.

I was in a very good space in myself, it is properly the cleanest I have been in my life, living off fresh organic food, I had cut alcohol out and I had even given up smoking a month before.

The next morning I had packed up my tent, had a mediation and headed back to the road.  Within minutes an old bus pulled up and I got in to see a group of hippies in their early twenties who just happened to heading to the same festival.

The bus was amazing, it was like being in a house with a kitchen and bunk beds, flowers hanging from the roof and crystals everywhere.

The journey began with crystal healings and reki as we took it in turns to drive.

And then it happened….

First we noticed the smoke that filled the bus. Then flames erupted from the floor. We pulled over to find that the engine had caught fire.

Luckily the bus started up again, after the fire was out, but half the floor was gone. We had to jump over a big gaping hole every time we moved.

Eventually we made it to the festival. Unfortunately it had taken all our money to get us there and we could not pay to get in.

The man at the gate, instead of turning us away, talked to other people at the festival and people  who we had never met before came up with some money and paid for us to get in.

The festival itself was small, only two hundred people and strangely nearly thirty people called Rob which made conversation interesting in the chai tent as lots of heads turned every time someone said the name.

We were in a small valley surrounded by lush green rainforest in which a small river deep enough for swimming ran through. On the beach of the river was a fire heated hot tube that could hold quite a number of people. Near to this were the workshop tents and the days were spent learning shamanism, yoga, meditation and other spiritual delights. Once the entry fee had been paid everything else was free. 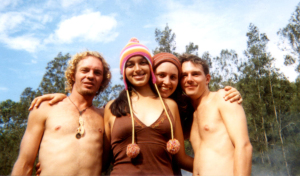 In the centre of the valley was the fire where we gathered for communal meals, fresh organic vegan food that sparkled on the plate and uplifted before the very first mouthful. By night we danced naked around the fire to the sound of didgeridoo and drum for there were no electric instruments, speakers or pop stars.

After about seven days, time was slightly lost and it was hard to remember I decided to go for a hike. I walked bare footed through the trees, not caring for snakes or spiders which was normal back then, they only scared me for the first few years, until I came to a sheer cliff.

I started to climb. Eventually I reached the top and there I sat crossed legged and meditated.

The view was amazing, lush green and light. It took my breath away, the trees seemed to fill my very being.

Down in the valley below came the sound of drums, a soft gentle rhythm that carried my mind into stillness.

The grass hoppers around me started chirping along to the rhythm, then at just the right moment a parrot would squawk then a kookaburra would laugh.

The wind sang a harmony through the trees and a stream near by tricked a sweet melody. The whole land filled me with its song as my own being seemed to be humming along as the drummers kept the time.

Suddenly I was brought back as three flys bit the skin of my hand and the music was gone, the drummers had stopped. But I had changed.

I arrived back to see people as spheres of light, not with my minds eye but with my own eyes. There physical and spiritual had blended. Waterfalls of light flowed from the trees ready to be breathed in, expanding out my own sphere with every breath.

I could see who had raised there energy by how big there sphere was and what colour they were emanating, and to those who could see like me no spoken conversation was needed. I could see people who’s spheres were greater than my own and how they grew with every breath.  I could see them smile knowingly as these people urged me to breath deeper.

Then came the deep red of a near-by argument and the spiritual fell away, people were physical again, the trees were green branches and leaves. I felt like I was falling, my stomach felt sick and my head dizzy and fuzzy.

I have never since raised been able to raise my energy to that degree since and I become full of my own emotional wounds when I have tried.

But I have never forgotten the Song of the Bush.

Rob Ellam lives near Glastonbury, UK.  He is following the Diploma in Sound Therapy with the Colour of Sound Institute.