INTRODUCTION TO SOUND THERAPY WITH GONGS

Gongs can be used therapeutically either as a stand-alone instrument or they can be combined with other sound tools as part of a harmonic sound therapy session.  Working and playing gongs either that are hand held and / or placed on a specially made stand can create sounds which are deeply healing, soothing and transformational as they penetrate every aspect of our being. 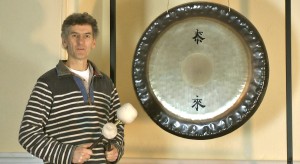 Gong therapy, gong baths and gongs as interlaced into sound therapy can be an extremely transformational tool when working with clients, groups and the self.  Gongs create tones that are absolutely amazing.

Gongs of whatever size get to the very heart of the client and allow deep seated emotional, mental, physical and psychological issues to be brought to the surface in a gently therapeutic way, allowing these issues to be seen from an impartial and non-judgemental viewpoint.

The gong’s sounds can be heard in a multitude of differing forms, energies, sounds and vibrations which when worked with in a synchronised respectful way creates a sacred instrument of immense adaptability, change and endless possibilities.

When played slowly and gently, gongs create soothing and healing tones and overtones, which allow one to slip easily into the waves of vibrations linked with deep states of consciousness.

When gongs are played quickly and energetically, they create tones, which are lively, quickening and awakening whilst still allowing one to be in a state of deep contemplation and relaxation.

When gongs are played with a strong firm hand, they can be booming and overwhelming with sounds that lift the essence and get to the very heart and core of physical, mental, emotional and spiritual issues, inter-relationships and blockages.

Gongs therefore are extremely adaptable and weave a sound web that is both divinely enchanting and physically earthly whilst manifesting deeply healing and transformational tones, which support and connect to the sounding of the spheres.

The history, science and art of gong making is believed to date back at least five thousand years and some believe to a much earlier period of ancient alchemy around 16000 BC.

Traditionally gongs are made by specialist families whose style, techniques and recipes are passed down from one generation to the next.  Each gong making family is thought to incorporate their own unique design, symbols and metal quantities/combinations in order to create a sacred and distinctive instrument.  Gong making stems back to four major centres of excellence including Burma, China, Annam and Java and there are thought to be many different shapes of gongs linked to these regions.

Ancient civilisations of a religious or spiritual nature have been working with and incorporating metals into the production of sacred objects, instruments and ritual items for many thousands of years.  The creation of sacred metal items has been intertwined into humanity’s nature since the very first discoveries, developments and advances in metallurgy.  From the very beginning, the creation of metal items was linked with our creative nature as humans.  Invocations of specific deities or beings into the creative process were at the very heart of metal work.

The creation of metal items as a sacred act means that tools would have been produced at sacred times of the day, month and year and associated energies of the allocated date and time would have been invoked into the very essence of the energies of the metals.  It is believed that metals had great meaning to the ancient people, with each metal having its own association and deities attached to it.  These energies would also have been worked with and respected in the creation of the metal objects.

In accordance with religious and spiritual beliefs of the time, working with metal would have been held as a sacred act and only those people or persons deemed worthy would have been allowed to be the creators of these sacred instruments and tools.  These specialist makers would have certainly worked in accordance and in conjunction with specific planetary alignments, sacred times of the day, month and year as well as phases of the moon.

The completion of the tools would have seen a sacred consecration ceremony, giving thanks to the energies and beings with offerings and prayers.  The tools themselves made specifically for the individual, community, building or order would have distinctive energies interweaved into the sacred process from beginning to end.

The production of gongs would have adhered to these sacred and ancient beliefs, with specific gong-making families dedicated to the production and perfection of the gong.  This is similar to the specialist Samurai sword-making families of Japan, who over thousands of years perfected the art and science of the Samurai swords whilst working in harmony with the energies of the individual and the metal to manifest a divine instrument.

Gongs have always been held in very high esteem and the ownership of a gong in the East is still seen as a sign of both spiritual and physical wealth.  Gongs are a symbol of good luck and just the very touching of a gong is thought to bring health, wealth and happiness. 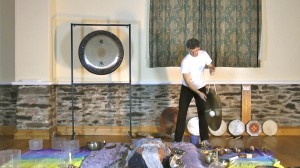 Shaman and priest have used the gong for the purpose of banishing evil spirits and demonic forces since its initial creation, due to its powerful and deeply penetrating sound, energy and vibration.  Gongs have also been incorporated into ritual, ceremonies, worship and devotion throughout the turning of the wheel of the year and the changing of the seasons.

Today gongs continue to a larger or lesser degree to be part of community life and in countries in the Far East the gong still plays an important part in the religious and spiritual community including weddings, funerals and spiritual/religious celebrations.

Traditional gongs are believed to be a mixture of several metals including cooper, tin, silver, lead, nickel, iron, zinc and meteorites.  The mixture and quantities of the metals is unique to each family and the exact metals and quantities kept secret in order to maintain the family’s tradition and the gongs sacredness.  Specific metals may have also been used in order to create specific gongs that worked in accordance with specific planetary forces, deities and spiritual beings or the person’s energies that the gong was being created for.

Modern gongs are mostly made from what is called B-20, which is a combination of approximately 80% copper and 20% tin (figures may vary to some degree depending on the maker).  Other metals may also be added to modern day gongs, again depending upon the individual maker.  In the early 17th century it is thought that Avedis, a prominent alchemist brought ancient and sacred metallurgy knowledge from Constantinople (now called Istanbul).  It is believed that gong-making families in Turkey still use this ancient knowledge today.

Today, in the West, gongs are predominantly seen as orchestral percussion instruments with a definite or indefinite pitch.  The word ‘Tam Tam’ is often used to refer to a flat surfaced and clear-sounding instrument and the word gong for a bossed or convex surface with a symphonic sound, which are used either hanging vertically or resting horizontally.  Gongs can also have a nipple or knob at the centre giving it a specific pitch.

With the increased popularity of eastern religions, spirituality and philosophically, the gong is entering western lives in a new and renewed way and is being used as a sacred instrument of sound for healing, meditation, self-transformation and inner growth.

Today gongs are still produced around the world with many dominant centres of excellence, with origins from the ancient past and secret techniques and styles used depending upon the location.  Traditional gong-making families can be found in Turkey, Thailand, Japan, Tibet, China, Burma, Indonesia, Korea, Vietnam and India.

In ancient times many advanced civilisations knew and incorporated gongs in some form in daily religious, spiritual and community life, including the Egyptians, Greeks, Romans, Persians, and Mongols.  In India they believe that the sacred sound of the gong is indicative of the creative force of the universe, which is, the sacred creative force likened to the chant of the Om.  The Gong is therefore a powerful symbol of creation and listening to the Gong was thought to connect one’s being into the creative and abundant nature of enlightened self-realisation.

The nature of the healing and enlightening power of gongs was introduced into the west by the controversial master of kundalini yoga, Yogi Bhajan, who arrived in California from India in the 1960s.  Many of the most eminent gong players such as Don Conreaux and Mehtab Benton were trained by Yogi Bhajan, and they in turn have gone on to train hundreds of people, including Rachel Burnett, the founder of the Colour of Sound Institute.